The Orion Nebula, M42, NGC 1976. Copyright Jodie Tighe, all rights reserved. Acrylic on canvas, 30 x 36. $825.00 framed.
The first time I looked through a good telescope, I aimed it at the Orion Nebula, about 1,600 light-years away, visible to the naked eye as a fuzzy patch in Orion's sword. The bright cluster in the middle is called the Trapezium, and the average age of its approximately 1,000 stars is about 1 million years - very young in astronomical terms. Active, recent and ongoing star formation is happening in the Trapezium. After a lifetime spent under what to the unaided eye seems a two-dimensional sky, stretched overhead like the domed walls of a thin curving tent, seeing this nebula made me feel as if what I would never have consciously called "the top of the sky" had just come off - and I had fallen up into it. 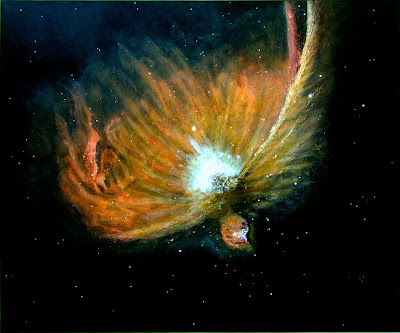 V838 Monocerotis, acrylic on panel, 16 x 20. In private collection, NFS.
Copyright Jodie Tighe, all rights reserved.
In January 2002, this variable star, 20,000 light-years away in the constellation Monoceros, flared to 600,000 times our Sun’s luminosity. It faded again soon, and astronomers aren't positive what caused its outburst. During the flare, V838 Monocerotis didn't shed its outermost layers, as most stars would. Instead, it grew to a huge size, and its surface temperature dropped to about that of a light bulb. What we see here is a “light echo” from the outburst that re-illuminates the surrounding dust shells it had shed years before. 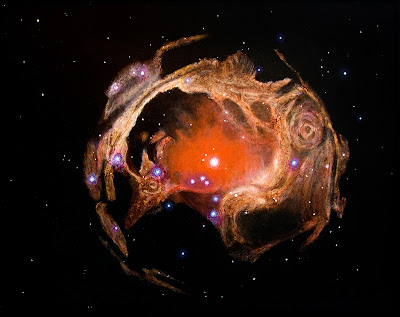 The Whirlpool Galaxy (M51, NGC 5194). NFS
Copyright Jodie Tighe, all rights reserved.
Here’s a close-up of the Whirlpool Galaxy, as if we were floating over it. About 100,000 light-years across, it lies about 30 million light-years away in the constellation Canes Venatici. The Whirlpool is quite near another, smaller galaxy not seen here, NGC 5195; it would be to the Whirlpool’s left. As NGC 5195 slides by, its gravity tugs at the Whirlpool's spiral arms, promoting star formation. The darker areas are gas and dust; the brightest areas are hot young blue-white stars, and the reddish areas are older star-forming regions. The Whirlpool is visible through binoculars, although it takes at least an 8-inch telescope and excellent conditions to start to see the spiral form. Look about 3.5 degrees southwest of the end star of the Big Dipper's handle. (The width of your three middle fingertips held together at arm’s length is 5 degrees.) 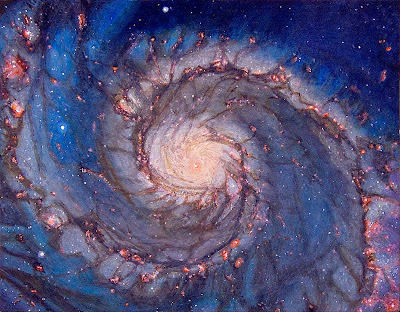 Star-forming region, Nebula RCW 49, acrylic on canvas, 20 x 20. $600.00
Copyright Jodie Tighe, all rights reserved.
Like the Trapezium Cluster in the Orion Nebula, this is a womb where stars are being born, and it even looks a bit like a womb. It's about 14,000 light-years away in the constellation Centaurus, measures 350 light-years across, and contains more than 2,200 stars. In the dust clouds, astronomers have seen about 300 newborn stars, some with protoplanetary discs. The blue-white supergiants in the middle have burned away the dust clouds from which they themselves were formed. 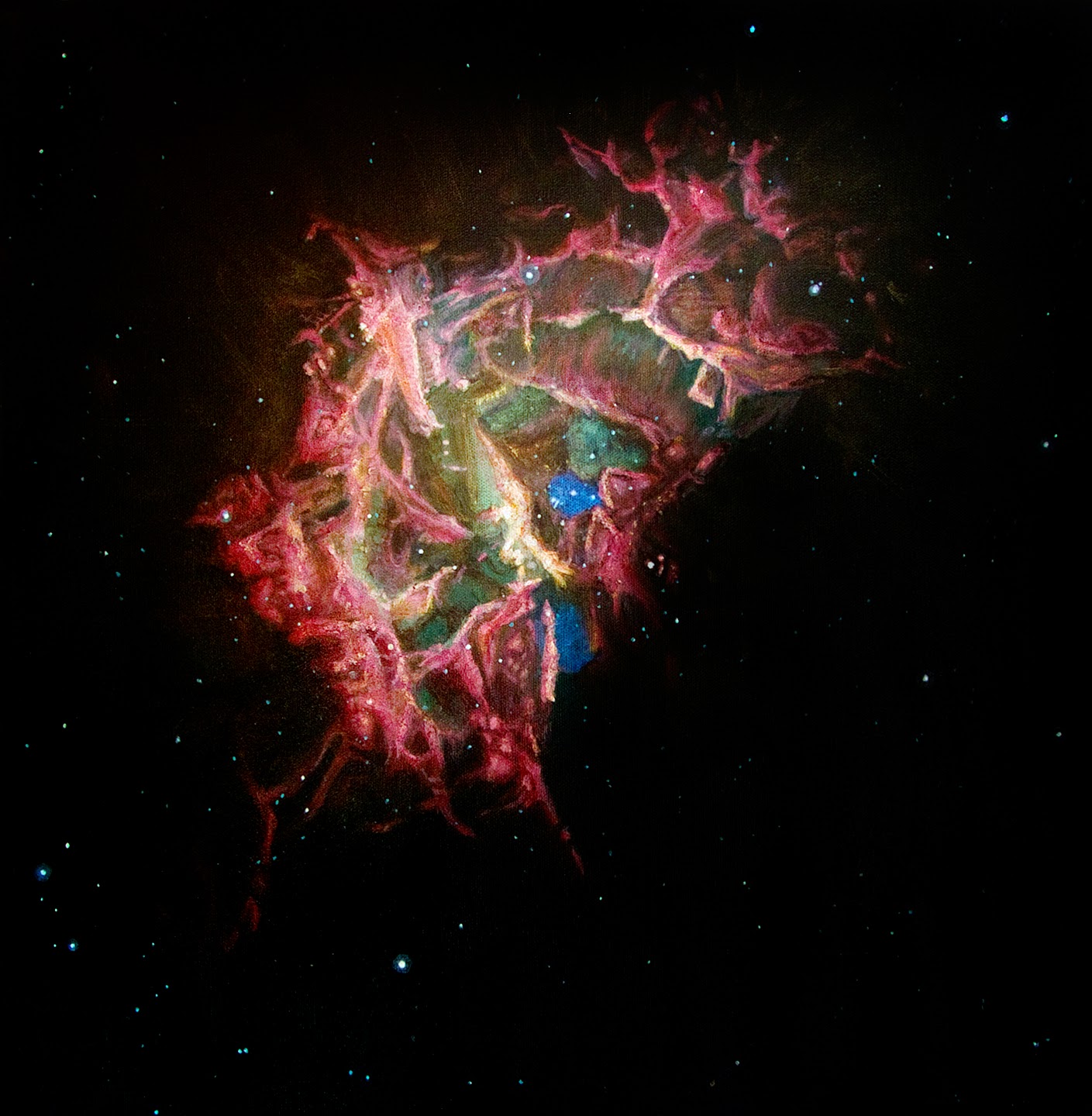 Omega Centauri (NGC 5139), acrylic on panel, 11 x 14.  $300.00
Copyright Jodie Tighe, all rights reserved.
This globular cluster is the biggest in the Milky Way Galaxy, containing as much matter as 5 million suns. Located in the constellation Centaurus, it is visible to the naked eye as a fuzzy 4th magnitude "star", low on the southern horizon (36 degrees south of the star Spica in the constellation Virgo) on spring and summer evenings. A good telescope won't give you this kind of color, but you can probably still pick out some blues. Omega Centauri measures about 150 light-years across and, at the center, the stars are packed in at an average distance from one another of about 1/10th of a light-year. 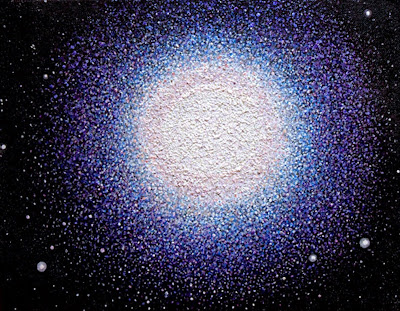 The Boomerang Nebula, acrylic on canvas, 20 x 20. $600.00.
Copyright Jodie Tighe, all rights reserved.
Five thousand light-years from Earth, in the constellation Centaurus in the southern sky, the Boomerang Nebula was created by a gas moving outward from a red giant star at its core. Its extremely low temperatures are the result of the rapid expansion (nearly 600,000 km/hr) of the gas into space. Just how cold is it there? One degree above what scientists call absolute zero, or minus 458 degrees Fahrenheit. This is colder than the cosmic background radiation left over from the Big Bang - in fact, it is the coldest place we have measured in the Universe. 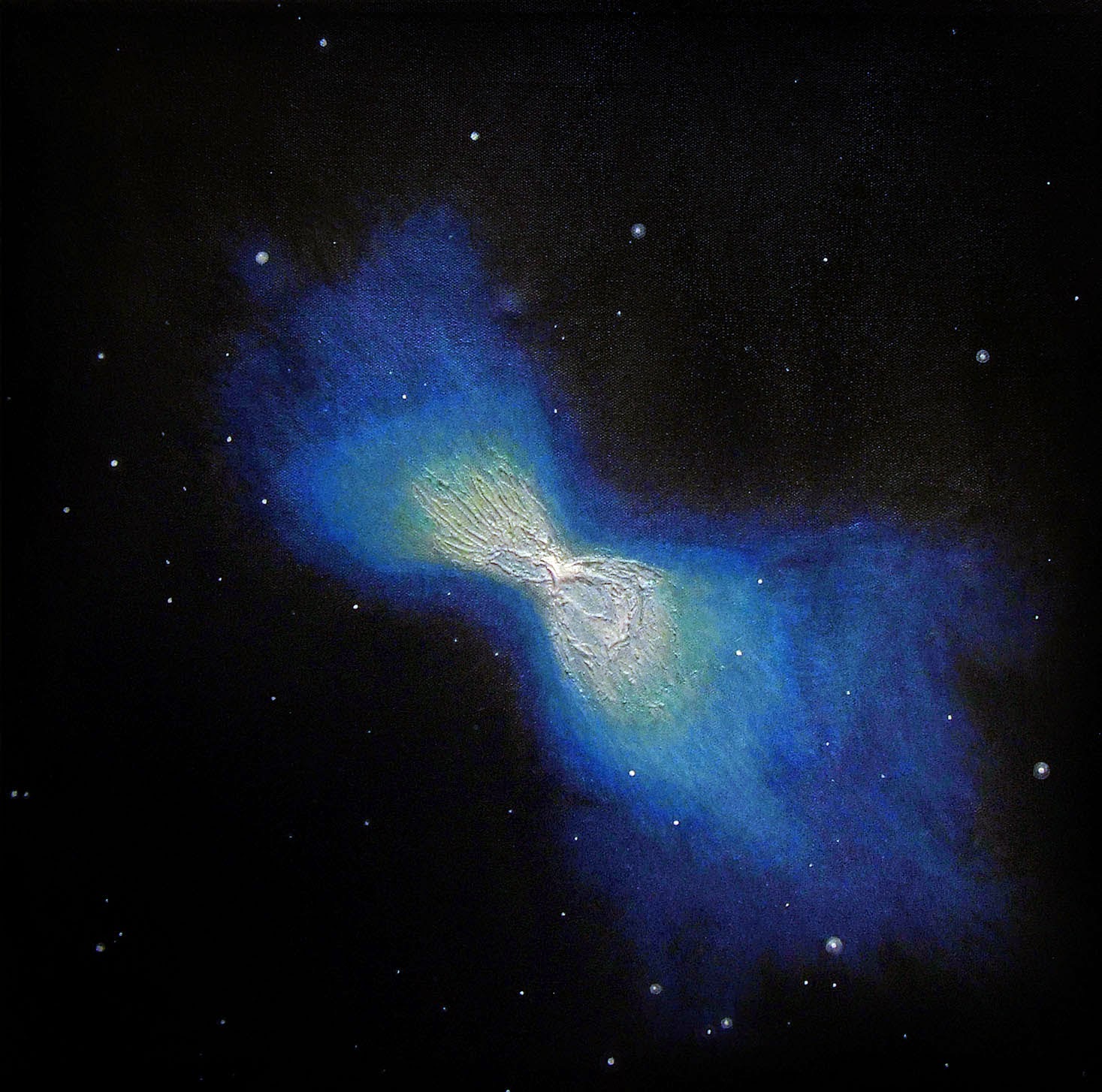 The Mice, NGC 4676 A and B, acrylic on canvas, 30 x 40. NFS.
Copyright Jodie Tighe.
Two spiral galaxies in the midst of a cosmic collision, the Mice lie about 300 million light-years from us in the constellation Coma Berenices. Computer simulations suggest we may be seeing the galaxies about 160 million years after their latest collision. The difference between the gravitational pulls from one another's near and far portions create their "tails" of stars and dust. The galaxies will continue to collide over and over again until, eventually, gravity will coalesce them into one huge elliptical galaxy. 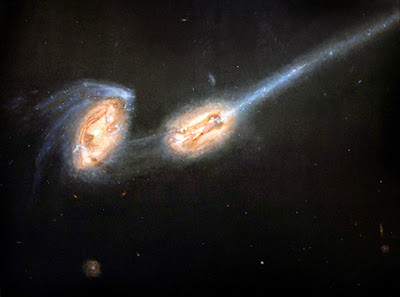 The Sombrero Galaxy (M104, NGC 4594), acrylic on canvas, 24 x 48. NFS.
Copyright Jodie Tighe.
In the constellation Virgo, lying 11.5 degrees visually west of the star Spica (the brightest star in Virgo), the Sombrero Galaxy is a spiral galaxy that we see closer to edge-on than face-on. At a distance of about 29 million light-years from us, the Sombrero has a glowing nucleus surrounded by a prominent dust lane. It can be seen with binoculars, an 8 inch telescope is needed to tell the central bulge apart from the disc, and the dust lane becomes visible with a 10-12 inch telescope. 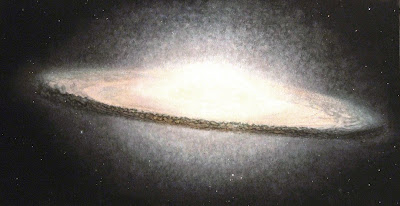 Image to be uploaded.

Veil Nebula (Cygnus Loop), acrylic on canvas, 18 x 36. $725.00
This supernova remnant is from a star that exploded between 5 and 8 thousand years ago. It lies in the constellation Cygnus, at a distance of about 1,400 light-years. This structure is so large in the sky that early astronomers did not realize it was one big object, and so they gave its parts several different names. The “Western Veil” is NGC 6960 (also called the "Witch's Broom") and is near the foreground star 52 Cygni; the “Eastern Veil”, whose brightest area is NGC 6992, trails off farther south into NGC 6995 and IC 1340; and Pickering's Triangle is brightest at the north central edge of the loop. NGC 6974 and NGC 6979 are luminous knots in a fainter patch of nebulosity on the northern rim between NGC 6992 and Pickering's Triangle. (So many names and numbers – let's just call it The Veil!)

Image to be uploaded.